Add mod support to a Unity game in 48 hours with mod.io

Who said that mod integration needs to be complex? The creators of Neanderfall certainly don’t. With a pre-built Unity Plugin and instant setup, supporting user generated content is easy with mod.io.

Neanderfall is a Unity game that supports user generated content and was developed in 48 hours during the 2020 GMTK Game Jam. Bilal Akil and Ethan Close created Neanderfall with the goal of crowd-sourcing their level development by enabling modding. They chose mod.io because of its instant setup and a Unity Plugin which takes minutes to get running. Within 48 hours they had a level editor built, which used mod.io to provide the storage, search and distribution of mods in-game. 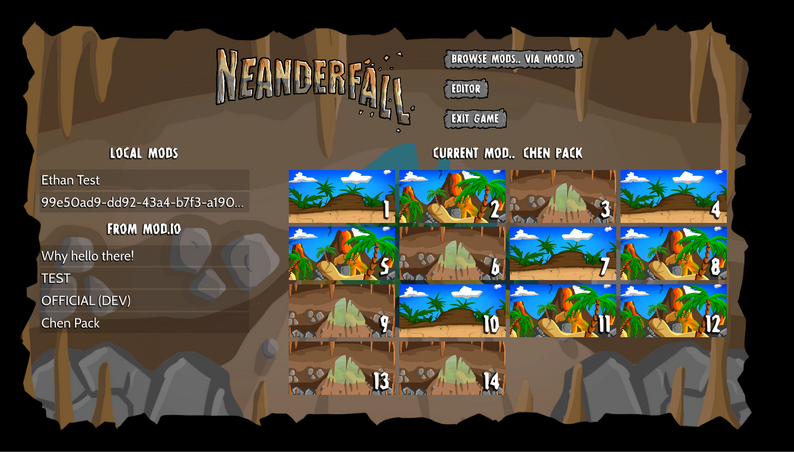 For Bilal and Ethan, choosing mod.io was an easy decision. After being exposed to the sheer volume of user generated content seen on games such as Totally Awesome Battle Simulator (TABS) and Snowrunner, they knew they had to use mod.io.

What they weren’t prepared for was how easy it was to use mod.io as their modding platform of choice. The pre-existing Unity plugin makes enabling mod support time-efficient and user-friendly. When we interviewed the game creators, Bilal (game developer) had this to say: “We really enjoyed the smooth, minimal user experience” and “the Unity plugin was very helpful as it solved a lot of problems we would have had to deal with such as authentication”.

You build the mod creation tools & game, mod.io does the rest

As the game developer you provide the mod creation tools and the ability to play the mods. mod.io solves everything else such as hosting, moderation, authentication, discovery, tagging, rating, community, marketplace, in-game integration and more. As such, we are similar to the Steamworks Workshop, however, mod.io also works on Steam, Epic, GOG, console and mobile which is perfect if you want a cross-platform solution.

We help 37 games power 200,000+ mod installs daily on PC, console and mobile, and we would love to help you engage and entertain your players by enabling your modders to share creative and captivating new content everyday in-game using mod.io.

Steps to add mod support to your Unity game

Take a look at the Youtube video below or head to our Unity Mod Support documentation to learn more.

If Bilal and Ethan can do this in 48 hours with a fully functional game, so can you. You can find us on Discord if you have questions.